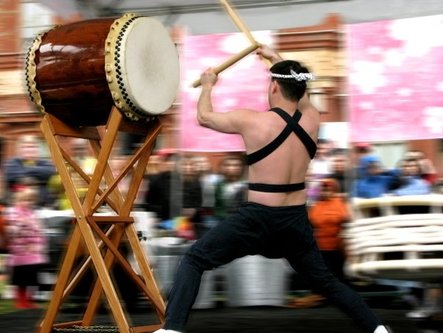 At the National Cherry Blossom Festival Family Day, April 2, 2009 Photo: Nick Glover
Nen Daiko's song Satori no Michi means "The Road to Enlightenment."
​
The visual centerpiece of the song is the odaiko or largest drum. It is on an upright stand with the head facing the audience. The deep resounding sounds of the odaiko represent the Buddha. The chu-daiko (medium-sized drums) represent people trying to find the path to enlightenment.

The song begins with a peaceful melody by bamboo flutes, either the shakuhachi (an end-blown vertical flute) or shinobue (smaller transverse flutes). The fue set the stage for a conversation between the chu-daiko and the odaiko. The song starts out quietly and builds up to a crescendo by the end. ​

While the other drums play a variety of rhythms, the Buddha's response is always the same. By the end of the song, the other drums have learned the pattern and play it with the Buddha. This progression symbolizes people's path in finding the Buddha's teachings and finally, really hearing them. ​
Inspiration for Satori No Michi

Ruth Vines played with Nen Daiko from 1994-2007. In 2007, she was inspired to write Satori no Michi because she was leaving the area and Nen Daiko. She wanted to express her strong feelings about Nen Daiko and Ekoji Buddhist Temple.

"The first thing that came to me was the melody line for the fue," says Ruth. "I wanted the song to give the sense of being grounded and free at the same time."

In the middle of the song, many drummers play solos. Ruth says this represents how everyone has their own journey.

"Everybody has their own energy and movements that they bring into the solos that are unique to them," she says. "It is similar how everyone has their own questions or doubts."

Ruth says the format of the song was inspired by Omiyage, a well-known song in the taiko world that was written as a gift to all taiko groups. The word omiyage means "gift." Satori no Michi is similar in that each instrument has a unique voice that blends together into a multi-layered song.

While Ruth wrote most of the parts, Greg Nakamura wrote the part for the set of shime or rope drums. Ruth says she told him she needed enough music to fill a certain number of measures, and he would improvise. Over time, his playing became consistent so the shime part now sounds similar from one performance to another. 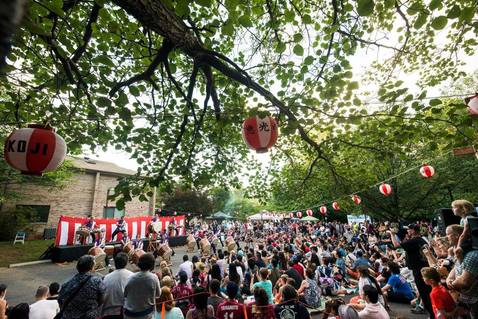