Who is Nen Daiko? 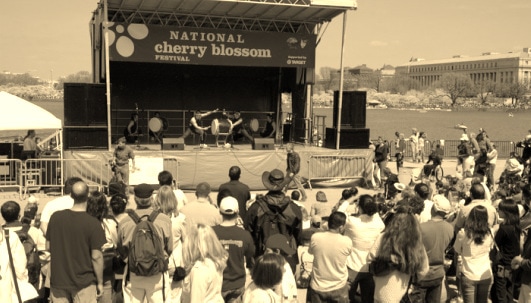 Nen Daiko is the taiko ensemble of Ekoji Buddhist Temple in Fairfax Station, Virginia, and has been performing in the Washington DC metropolitan area since 1994.

With the guidance of then-Rev. Kenryu Tsuji and our sister groups Soh Daiko (New York City, NY) and Hoh Daiko (Seabrook, NJ), Nen Daiko sought to represent our temple by emphasizing the basic philosophies of Jodo Shinshu Buddhism and its connection to taiko and kumi-daiko (ensemble playing of taiko).

​While affiliated with Ekoji Buddhist Temple, our members are diverse and of different faiths, brought together by a common respect for the art of taiko, the teachings of Buddhist taiko, and a joy and exuberance for expressing ourselves through the beat of the drum.

We participate in many local and national events throughout the year, including the National Cherry Blossom Festival and the summer Obon Festival at Ekoji Buddhist Temple.  Please check our calendar for our latest performance information!
Interviews with Nen Daiko
Nen Daiko at the Smithsonian American Art Museum in March 2017